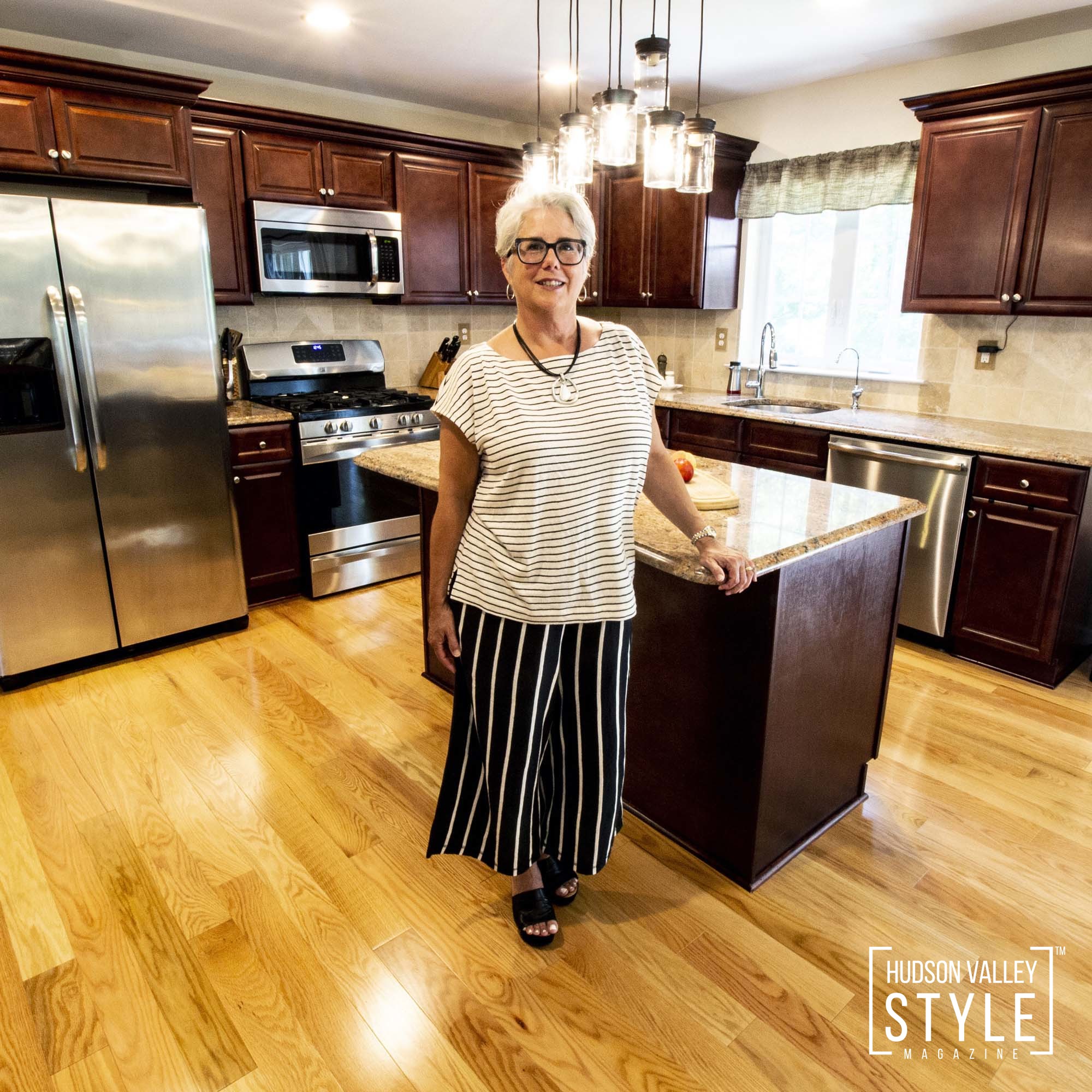 Let’s just admit it: the concept of a living room as we know it is gone! The kitchen takes a center stage in almost every home.

We sat down or rather stood up around a granite kitchen counter with Realtor® Toni Perry who just listed an amazing Hudson Valley Style bi-level ranch home in Highland, NY. On top of being a Realtor®, Toni has more than 30 years of experience running a catering business, so she knows a thing or two about Kitchens and what happened to the Living Rooms.

But first of all, where did the Living Room come from in the first place?  In Western Architecture, we can track down its roots to a Front, Reception, Lounge, Grand or a Sitting room that historically served as a space to welcome guests to a residence and socialize. We often find those rooms in victorian and colonial homes just off the entrance to a residence. In huge mansions of the previous centuries, those spaces were grand, often boasting 2-story high ceilings and one-of-a-kind staircases.

With the democratization of residential architecture came a smaller version of the Grand Room that also found a new and less glamorous purpose – to accommodate placement of a couch and a television set. Television was one single technology that defined the 20th century and was a ubiquitous part of everyone’s life taking center stage right there on the wall in your living room. At the same time, in the floorplan of a home, Kitchens moved closer to Dining Rooms and often opened up into the dining and living spaces. “I have a small Kitchen but for the size, a lot of countertops and there is also an area for seating at the counter and I am usually on the other side prepping and talking to guests from there.  I spend most of my time in the Kitchen at that spot,” – said Toni Perry.

In American residential architecture, split-level home, a variation of a ranch-style home, became one of the most popular new construction choices throughout the 20th century and was an example of introduction of the “open concept” floorplan into everyday life.

Technology evolved and so has the functionality of our homes. As television, multimedia content, and for the most part, social interactions migrated into hand-held devices, TV sets find themselves more and more obsolete and thus the concept of a 20th-century living room is at its dawn.

“In my experience, the Kitchen has become the most important room in the home.  I feel we have become a “foodie” society.  We talk about food, read about food, and watch programs about food. Where better to spend your time (and money) than in the kitchen.  Everyone gravitates there naturally now.” – added Toni.

Maxwell: “Now what is next for the Living Room, literally merge with a Kitchen?”

Toni Perry: “Absolutely! As the Kitchen has become The New Living Room, you want to have as much access to it, physically and visually, as you can. The way to accomplish this by an Open Concept Floor Plan.  Everyone may not be able to fit in the kitchen but with the open floor plan, you still have a visual connection to it regardless of where you might be or what you might be doing.”

Maxwell: “So what is your opinion on the impact of the Open Concept Trend in Real Estate Industry? Architecture? Interior design?”

Toni Perry: “The impact is great.  Now that the Kitchen/Dining area/Living Room, and any other space that is included, is all in visual range of each other, flow, design, color, texture, is now being looked at differently.  In the past, a kitchen could be a completely different theme then let’s say the dining room.  You could have a country/informal style kitchen and when you go into the dining room that was closed off by doors and walls, you could have had a formal feel in a completely different color scheme.  The appliances really didn’t matter much except for function because few people saw them.  Now they are part of the design an decorating.  All the “rooms” in an Open Floor Plan need to blend well with color and texture.  You now find a lot of wood flooring in the Kitchen to blend well with the rest of the space or you find tile in the Living Room area for the same purpose; to blend well with the use of it in the kitchen area.  Wall to wall carpeting, for the most part, has been left in the past.  Also, with open floor plans, the ceiling heights come into play.  If the floor plan is open the use of higher ceilings has played a role. Then there’s lighting; I can go on and on…”

Maxwell: “We are in a split-level or bi-level ranch home now, this architectural design was one of the first to use an open concept floorplan. Have you noticed an increase in the popularity of these homes in recent years? Do you see an evolution of the concept in newer construction homes?”

Toni Perry: “Quite so.  I was recently in North Carolina visiting friends who purchased a home in a newly developed community.  I visited a few of the 2,500 homes that have been built there in the past 5 years (with 5,500 to go) and they all boast an Open Floor Plan.  It gives a casual feel for a living but done beautifully with a choice of appliances, textiles, flooring, color.  I think people feel more comfortable in an open concept space whether they are living in a home or are visiting.  You’re always part of the happenings.”

It seems like the Open Concept Floor plan has gained its popularity across all generations, but if you are interested in what it takes to Design Your Kitchen Like a Millennial, read this article from our Winter 2019 Issue that explores in-depth Kitchen Design Trends of the Millennial Generation.